Jane Perrone, writing for The Guardian, provides a list of garden trends to take home – including that euphorbias are the star of any sunny border and gravel is on-trend (for design gardens anyway) as a ground cover.

The Telegraph has provided a run-down of all the medal-winning gardens. Read it here.

Embed from Getty Images
Pearlfisher designer John Warland polishes an aquatic tank in the garden which aims to mimic an underwater scene and highlights the problem of plastic in our oceans (Gold in Space to Grow Gardens).

Embed from Getty Images
The Welcome to Yorkshire garden (Gold in Show Gardens).

Embed from Getty Images
English designer Chris Beardshaw, who had a spectacular garden at Ellerslie in Christchurch in 2010, pictured in his Morgan Stanley garden for the National Society for the Prevention of Cruelty to Children (NSPCC) – Best in Show.

Embed from Getty Images
A visitor with marble sculptures by Paul Vanstone in the Coombe Sculpture Garden.

Embed from Getty Images
A Chelsea pensioner makes a colourful focal point for a commercial stand.

Embed from Getty Images
Simon Lockyer holds two specimens of Primula auricula in front of his stand. W&S Lockyer Nursery was founded by Simon and his dad Bill, who died in 2016. It holds the national collection for Primula auricula doubles.

Embed from Getty Images
A worker adjusts a floral display.

Chelsea also has a Plant of the Year competition – this year choosing Hydrangea Runaway Bride Snow White, a lace cap that flowers all the way along the stems. Graham Rice has written an interesting piece about how the judging is done and why it’s a flawed system.

There was sparkle, there was Markle and there was a beaming Harry. There were hats and horses and trumpets. Did you sit up late and drink champagne and munch on cucumber sandwiches and chocolate eclairs? I did some of that, even though I wasn’t at home but in a hotel room!

I’m sure you have your own opinion of the dress, the hair, the tiara, but I think we’ll probably all agree that Meghan’s veil was stupendous, all 5 metres of it!

Embed from Getty Images
Clare Waight Keller, artistic director at Givenchy and designer of Meghan Markle’s wedding dress, with a sample of the hand-embroidered lace that made up the veil.

According to a press release from Kensington Palace, Ms Markle expressed the wish of having all 53 countries of the Commonwealth with her on her journey through the ceremony with Ms Waight Keller designing a veil that represented the distinctive flora of each Commonwealth country united in one spectacular composition.

“Significant time was spent researching the flora of each Commonwealth country and much care was taken by Ms Waight Keller to ensure that every flower is unique.”

The veil was made from silk tulle with a trim of hand-embroidered flowers in silk threads and organza. Each flower was worked flat, in three dimensions with the embroiderers spending hundreds of hours meticulously sewing – and washing their hands every 30 minutes – to keep the tulle and threads pristine.

In addition to the flora of the Commonwealth, Ms Markle also selected two personal favourites:

Wintersweet (Chimonanthus praecox), which grows in the grounds of Kensington Palace in front of Nottingham Cottage (where she has been living with Prince Harry), and the California poppy (Eschscholzia californica), the state flower from Ms Markle’s place of birth.

Symmetrically placed at the very front of the veil, embroidered crops of wheat symbolised love and charity (and from what I understand are also a motif for fertility!).

Embed from Getty Images
The embroidery can be seen in this photo of the bride entering St George’s Chapel at Windsor Castle and, below, as she leaves.

Despite the extravagant use of flowers at the entry to St George’s Chapel, as can be seen above, the bride carried only a small posy bouquet.

Embed from Getty Images
The bridal bouquet carried by the Duchess of Sussex at her wedding was then laid on the Tomb of the Unknown Warrior in the west nave of Westminster Abbey in London.

The Palace press release notes that Prince Harry handpicked several flowers from the couple’s private garden at Kensington Palace to add to the bouquet designed by florist Philippa Craddock.

The spring blooms include forget-me-nots which were the favourite flower of Diana, Princess of Wales. The bouquet also including scented sweet peas, lily of the valley, astilbe, jasmine and astrantia, and sprigs of myrtle, all bound with a naturally dyed, raw silk ribbon.

The myrtle sprigs are from stems planted at Osborne House on the Isle of Wight, by Queen Victoria in 1845, and from a plant grown from the myrtle used in The Queen’s wedding bouquet of 1947.

The tradition of carrying myrtle begun after Queen Victoria was given a nosegay containing myrtle by Prince Albert’s grandmother during a visit to Gotha in Germany.  In the same year, Queen Victoria and Prince Albert bought Osborne House as a family retreat, and a sprig from the posy was planted against the terrace walls, where it continues to thrive today.

The myrtle was first carried by Queen Victoria’s eldest daughter, Princess Victoria, when she married in 1858.

The ‘Orchid Comb’ represents the height of Lalique’s jewellery production. His studio rendered the highly naturalistic orchid out of a single piece of ivory; diamonds play a supporting role, picking out the veins along three slim leaves in glowing plique-à-jour enamel. The stem is attached by a gold hinge to a three-pronged horn comb. This is the most flamboyant of all the pieces purchased by museum founder Henry Walters at the St Louis World’s Fair in 1904. Never intended to be worn, the Orchid Comb entered the collection as a masterpiece of technical accomplishment in the field of the decorative arts. The Walters Art Museum is in Baltimore, Maryland in the United States.

But wait, there’s more … the Gulbenkian Museum in Lisbon, Portugal is home to an orchid comb by Lalique that features not one, but three slipper orchids. 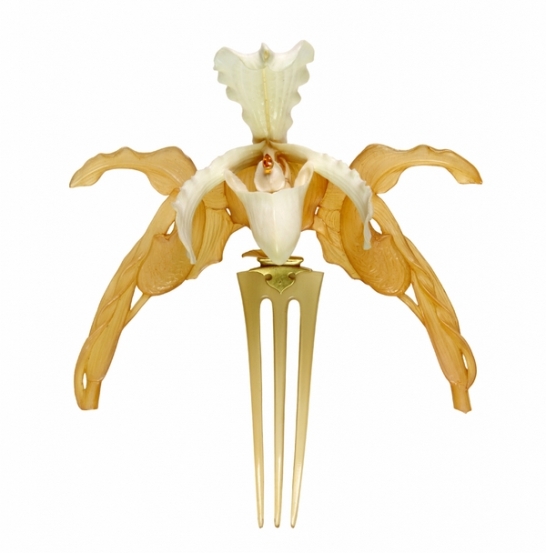 The orchids are carved from two different materials – facing forward is an ivory Paphiopedilum, which facing left and right are orchids carved from horn. A small drop-shaped topaz is at the centre of the ivory flower. The comb itself is also in horn and connected to the ornaments by a gold hinge. 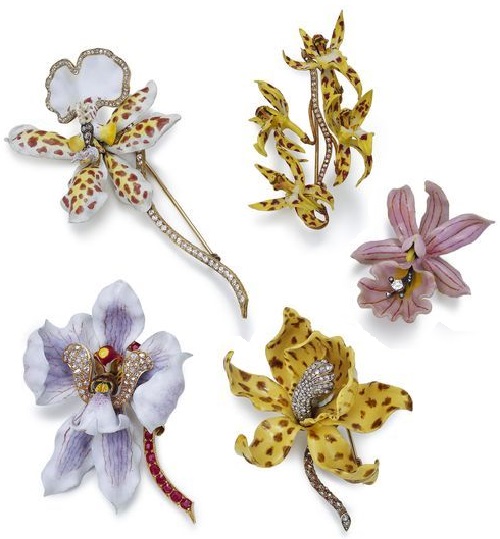 Some of the orchid brooches designed by Paulding Farnham exhibited at the 1889 Paris World Fair. Image: nasvete.com

Paulding Farnham (1859-1927) is a name that won’t leap to mind when thinking of fabulous jewellery designers but in the late 19th and early 20th centuries he raised the profile of American company Tiffany & Co – and it was all thanks to his botanical designs, especially orchids.

Farhham joined Tiffany’s in about 1879 and worked for them until 1908, becoming chief designer and director of the jewellery division in 1893.

The 1889 Paris Exposition Universelle marked Farnham’s first major display of work, which included his enamelled and jewelled orchids. Each orchid was drawn from life after blooms were sent from places such as Guatemala, the Philippines, Colombia, India, Mexico and Brazil with the individual blooms “coated in copper to preserve [them] for study”, according to Kristin Edrington in her 2012 Master’s thesis and quoting from Jeweled Garden by Suzanne Tennenbaum and Janet Zapata (Vendome Press, 2006).

The 24 Tiffany brooches caused a stir at the Exposition, Edrington says. “The public was stunned and fascinated with the fact that the orchids were so life-like, and the actual species of orchid could be matched with the jeweled orchid. While many French jewelers … had captured the floral form and stylized it, Farnham was able to recreate the flowers’ very essence of realism and life. He took floral jewelry design to an entirely new level of naturalism.”

The company won a silver medal, among other awards, for Farnham’s orchid designs. Seven of the brooches remain in the Tiffany Archive.

Nineteen institutions, including a large number of botanical gardens, are collaborating in the three-year-long EU Horizon 2020 project, BigPicnic. Scientists, politicians, industry and the public will be brought together to start a conversation about worldwide food security – that sufficient healthy food should always be available to everyone without causing damage to the planet.

Botanic gardens, with help from other partners, will co-create a range of exhibitions and participatory events to generate dialogue and build greater understanding of food security. The collaborative approach aims to give a voice to adults and young people, communicating their views to policy-makers, sharing ideas, encouraging debate on the future of our food and achieving Responsible Research and Innovation (RRI).

Co-ordinated by Botanic Gardens Conservation International (BGCI), BigPicnic Partners span 12 countries across Europe and one in Uganda. Read more about BigPicnic and ongoing events (from 2018) here.

New Zealand science writer Bob Brockie looks at giant timber bamboo – a plant that flowers only once every 120 years, last blooming in 1845. Once it’s flowered, Phyllostachys bambusoides​, which has edible shoots and tips, dies.

He also mentions a different bamboo in India that when it flowers is known as causing a Bamboo Death Year for local inhabitants. Read more here.

We’ve all seen those beautiful photos of food decorated with real flowers – quite a thing on Instagram apparently. Well, botanist James Wong is over it, especially when the food is decorated with toxic flowers! Read more here.

Can’t make the Chelsea Flower Show in London? Treat yourself to a preview of the May 22-26 event. Cheers!

Two great deals around for a short time …

Tauranga’s Garden and Artfest is offering a Mothers’ Day special – buy a 4-day pass before May 13 for only $50 (normally $65). The ticket also includes unlimited entry to Bloom in the Bay which will be at the new Festival Hub at the Historic Village. The festival is from November 15-18. Full details here.

The New Zealand Flower & Garden Show, which debuted in Auckland last year, has opened its earlybird ticket purchase today ($28/$26) – tickets valid for ‘any day’ entry. Purchase before May 18 and go into a draw to win a lunch out. The show is from November 28-December 2. Full details here.

A young woman offers a bouquet of lily of the valley to a police officer during the traditional May Day demonstration in Toulouse, southern France, on May 1, 2016.

And we can’t let May 1 go by without noting a lovely tradition in France – it’s a public holiday celebrating the nation’s workers (La Fête du Travail) but is also known as La Fête du Muguet (Lily-of-the-valley Festival).

The floral tradition is supposed to have begun when King Charles IX of France was presented with a posy of lily-of-the-valley (Convallaria majalis) on May 1, 1561 as a token of luck and prosperity for the coming year. He liked the idea so much he decided to present the fragrant flowers to the ladies of his court each year on May 1.

There was also an old European tradition of “bals de muguet” or Lily-of-the-Valley dances; once a year, this was a chance for young singles to meet without having their parents’ permission. The girls would dress in white and the boys wear a sprig of muguet as a buttonhole. In about 1900, men started to present the flowers to women to express their affection, although these days they are a more general token of appreciation between close friends and family members.

Families in country areas get up early and go into the woods to pick the flowers.  Individuals and labour organizations are able to sell bouquets of lily-of-the-valley on the street on May 1 without paying tax or complying with retail regulations! Read more about May Day celebrations in France.

Some good growing advice here (northern seasons) from Carol Klein, who notes that like many prolific plants, lily-of-the-valley can be difficult to establish.

If you live in the Tauranga area and would like to learn French, have a look at the French with Shelley website. She’s a great teacher and will immerse you in French culture too (how do you think I know about La Fête du Muguet?).