‘Cosmic Ice’, a single white daffodil, grown by Ian Fisher and Rob Hill of Fisher Nurseries in Cambridge, has been named Champion Bloom at the North Island National Daffodil Show in Gisborne. (The Facebook link has a lovely photo of ‘Cosmic Ice’.)

The Fisher Nurseries team entered 350 blooms with 1200 in total on show.

‘Cosmic Ice’ is a bulb raised in Nelson by long-time daffodil breeder John Hunter. Read a 2015 report about his 70 years of growing the bulbs. He is one of two people in the world to attain three prestigious awards for daffodil growers – a gold medal from the American Daffodil Society, the David Bell Gold Medal from the National Daffodil Society of New Zealand and the Peter Barr Memorial Cup from the Royal Horticultural Society in London.

Gordonton daffodil grower and judge Graham Phillips said he always enjoyed coming to Gisborne for flower shows… Although many entries appeared to share the same geometric perfection as ‘Cosmic Ice’, judges examined the flowers closely for imperfections, [he] said.

“Unlike dog shows, daffodil people do not look like their flowers.”

The South Island National Daffodil Show was held in Hope (near Nelson) on September 24 and 25. The winner there was a seedling bred and entered by Aaron Russ of Christchurch. (Sorry, can’t find a photo of it, or even a report of either National Show on the Daffodil Society website.)

The Tauranga Orchid Show is proving a great success – so many people have said they’re smiling all the way round the Alice in Orchidland display, which is beautifully supported by displays from the BOP Orchid Society, Whangarei Orchid Society, Leroy Orchids and the BOP Bromeliad Group.

The judges did their thing this morning and the results are … 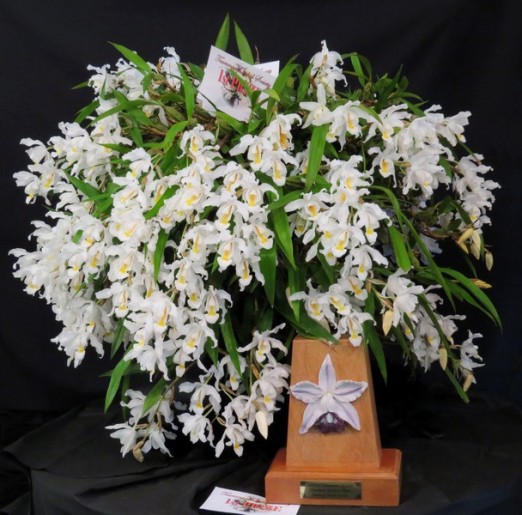 Although orchid growers ‘invariably’ kill a few plants they should chalk it up as part of the learning process, according to Tauranga Orchid Society president Conrad Coenen.

He won’t let on how many plants he’s sent to the great compost heap in the sky – or what their total value might be – but says he keeps the name labels to remind him of his mistakes. “It’s like gardening in general. You grow with your plants.”

Hundreds of years of orchid-growing experience will be available at this year’s Tauranga Orchid Show and Conrad invites people to take advantage of it. “Come and ask questions, look at the plants on display, watch our repotting demonstrations and buy some plants to take home and try.”

A qualified nurseryman who works as a landscape gardener, Conrad is a ‘born-again’ enthusiast after letting his membership lapse as a young family and work took up his time.

“I remember buying an Anguloa clowesii, or tulip orchid, for $40, a huge sum for me back then. It flowered once in 5 years – but for me getting something a little bit difficult to flower is the whole excitement of orchids. We try things out, we look things up, we talk to people more knowledgeable than ourselves.

“What I love about belonging to an orchid society is the camaraderie, the people you meet and the plant collections you get to see.”

His favourites are Lycaste orchids, a close cousin to the Anguloa type. “They’re big, they’re bold and I can’t get them to flower,” he laughs. “I get one flower on a plant and think it’s amazing but I know they can throw 40 to 60 flowers at once.”

The theme for this year’s show is ‘Alice in Orchidland’ which is allowing society members to show off plants in a fun setting.

“The show is a chance to let people see some stunning flowers as well as letting them know that orchids aren’t always ‘hot-house flowers’ that need special equipment and demand lots of attention. There are plenty of people in Tauranga growing orchids outside and there are many cool-growing varieties that will do well here.”

In New Zealand the calendars tell us that spring begins on September 1. So here we are halfway through the month and still getting four seasons in one day – some of those ‘seasons’ including hail and a day in the past week when I was back in full winter dress code. Today has been alternate rain and sun, some quite high temperatures and some very chill wind.

Feel like getting in some early vege? I was amused to read recently that soil scientist ‘John’ Walker, otherwise known as ‘the Prof’ to many gardeners, reckoned the best way to judge if it was warm enough to start planting out was to drop your trews and sit on the ground. If you ended up with a cold seat, then it was still too cold for planting. And apparently he readily demonstrated this! Read an obituary for him here.

My Vege Grower has some of his little darlings under a cloche in the garden and the rest waiting in their trays on the shed windowsill. He’s trying to get a headstart on the tomatoes this year as he reckons they cropped too late this past summer (and so we didn’t get the harvest we should have).

I think I’ve spied a couple of random garlic bulbs shooting up in a flower bed so we’ll see what eventuates there. The main garlic crop is otherwise doing well.

Because of this knockabout weather I thought I’d share some spring images from the recent Van Gogh & The Seasons exhibition in Melbourne. We were there for the second-to-last weekend which was, as you might expect, crowded (the show was extended by a few more days). Thankfully most people kept their good humour as we shuffled around the paintings like a giant conga line – mostly silent and without the high kicks!

How serious we all are! Photo: Sandra Simpson 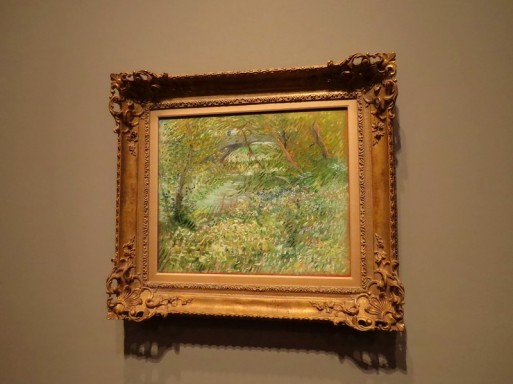 Riverbank in Springtime, painted in Paris in 1887. Photo: Sandra Simpson

A Patch of Grass, also painted in Paris in 1887. Photo: Sandra Simpson

Tree Trunks in the Grass, painted in St Remy in April 1890. Van Gogh was in the local asylum and it’s thought this is the first painting he made when he was well enough to venture from his room. Photo: Sandra Simpson

Self-portrait 1887, painted in Paris. Suffering from breakdowns, selling nothing in his lifetime and committing suicide, ironically Van Gogh is now considered a ‘master’. Photo: Sandra Simpson

Mostly I see Cryptomeria japonica ‘Elegans’ (Japanese plume cedar) planted individually – there’s even one at the end of my street I realised the other day – but there’s a group planting in the grounds of Government Gardens in Rotorua that was the first to catch my eye.

I had parked nearby and wondered both at the unusual shape of the trees and their mahogany-purple colour. Could it be a reaction to the sulphur-ish air and ground?

Well, no. The trees were wearing their winter coats (in summer the soft foliage is a blue-green). Now that I know what to look for – they have quite a distinctive growing shape – I’m beginning to see them when they’re ‘just’ green too. The winter colour is so unusual that it makes them a magnificent specimen tree.

The Great Plant Picks website says the juvenile foliage, which the tree retains all its life, is more needle-like and softer, giving the tree its common name of plume cedar and that the cultivar ‘Elegans’ was introduced to the US from Japan in the mid-1800s.

It can apparently be successfully grown in a pot, and there’s also a smaller-growing, more pendulous form – Cryptomeria japonica ‘Sekkan-sugi’ – that has cream-tipped green foliage that turns almost white in winter.

Cryptomeria japonica proper is the national tree of Japan and often planted in numbers around temples and shrines (and don’t change colour). In 2012 I was driven along part of the 35km Cedar Avenue of Nikko, lined on both sides by 13,000 Japanese red cedar, some of them original to the planting 400 years ago, although they are replaced as they’re lost.

Read an article about C. japonica being used for shelterbelt/plantation trees in New Zealand. They’ve all been cloned from one tree and registered as C. japonica ‘Egmont’.

This is the time of year that southern hemisphere gardeners are getting ready for their rhubarb plants to start springing back into action.

But did you know that rhubarb is a vegetable, a close relative of garden sorrel, and both are members of the buckwheat family? (And we know not to eat the poisonous leaves, don’t we?)

The Rhubarb Compendium website is a fascinating read and lists many species of rhubarb, which originated from China, Tibet and Siberia. See the list here.

Rheum officinale was cultivated for its rhizome which was taken in autumn from plants at least 6 years old, dried and used in Chinese medicine. “When taken internally in small doses, rhubarb acts as an astringent tonic to the digestive system, when taken larger doses rhubarb acts as a very mild laxative.” The list of what it can be used to treat is extensive, including acne. Read more here. 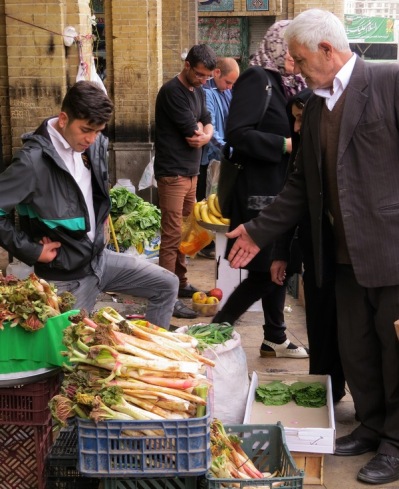 The rhubarb I saw in Iran is likely to be Rheum ribes which grows wild from Turkey through to Armenia and including Lebanon and Syria. In these countries, the root is also used medicinally, as well as the stalks eaten raw or cooked in sweet and savoury dishes. I can heartily recommend Koresh Rivas (Lamb & Rhubarb Stew).

Marco Polo is credited with bringing medicinal rhubarb to Europe in the 13th century, called Rhacoma root. The drug was so highly regarded that in 1657 in England it could command three times the price of opium.

The popularity of rhubarb as a pudding took off in the old British Empire for two reasons – the 1837 coronation of Queen Victoria which saw the introduction of the ‘Victoria’ variety by nurseryman Joseph Myatt (still available) combined with a significant reduction in sugar taxes in the mid-19th century, which made the sweetening of cooked rhubarb far more affordable.

In his 2011 book, Forgotten Fruits, author Christopher Stocks calls Myatt “the godfather of modern rhubarb”, and credits him with popularising as a food a plant that had previously been grown for medicinal purposes.

The forcing process – an earlier crop with a sweeter stalk – was discovered by accident in 1817 in the Chelsea Physic Garden in London but 60 years later the main growing area moved to Yorkshire. The Rhubarb Triangle in West Yorkshire once produced 90% of the world’s winter-forced rhubarb, an astounding statistic. This story says that the area is a frost pocket, good for the main crop that’s grown outside, while the high-value ‘forced’ rhubarb is grown in the dark in heated sheds – and apparently the sound of the buds breaking open is audible!

This is a tremendous video (and commentary) about what goes on in a forcing shed (3.24 minutes). 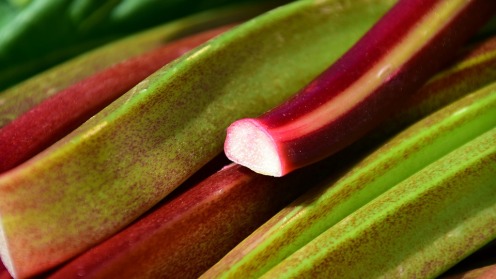 John Bartram is the first person known to have grown rhubarb in the United States, after being sent two species in the 1730s by Peter Collinson and another by Benjamin Franklin in 1770. Intriguingly, although it was still considered a medicine, Collinson in 1739 wrote to Bartram that it made excellent eating in tarts. Read more at the Philadelphia Historic Plants Consortium website.

It wasn’t until 1829 that rhubarb appeared in American seed catalogues, and has been a popular garden product ever since, known as ‘pie plant’ by many housewives.

And what of the name, rhubarb? According to an online dictionary of etymology, English takes it from old French (rubarbe) which came from Latin which took it from the original Greek, which was Rha barbaron, a combination of two words meaning “not from around these parts” (barbaron also gives us barbarian). Rha comes from the ancient Greek name of the Volga river (and Rha was itself a loan from Scythian, the ancient Persian language), perhaps simply meaning “a faraway place we know nothing about” rather than indicating the plant came from Russia; or perhaps rhubarb was imported into the Roman Empire from China via Russia (and remember we’re talking about the root at this time, not the stalk).