For me, flowering bulbs are a sure sign spring is here but over the years it’s been my pleasure to meet bulbs that flower at other times of the year – Haemanthus albiflos (white) and Haemanthus rotundifolius (red) are autumn-flowering bulbs, while Haemanthus coccineus (red) is late-summer flowering.

My planting of H. albiflos has clumped up nicely and this year has produced myriad flowers without the aid of any extra summer watering through our long, dry period, thanks to the bulb being native to arid parts of South Africa. The plants like to be left undisturbed and the biggest problem I have is snails snacking on the broad, strappy leaves. Read more about cultivation here. 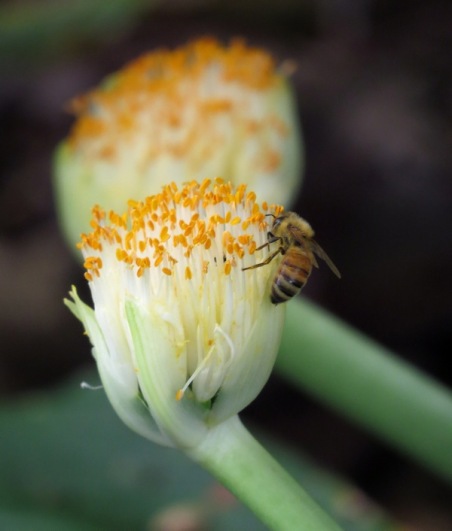 To my mind, the flowers are a little ho-hum when viewed individually, but do look good en masse. H. albiflos likes a bit of shade (similar to clivia), which makes it a useful plant for a woodland-type garden or under large trees. However, the Pacific Bulb Society entry notes it can be grown in full sun and although the leaves will suffer, the flowering doesn’t!

H. albiflos, or white paintbrush, is evergreen so an unusual member of this family as most Haemanthus don’t have leaves and flowers at the same time. 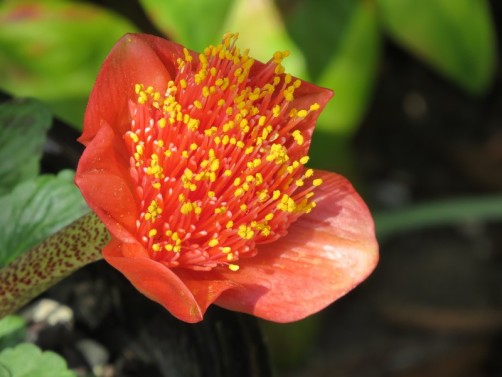 I bought a single H. coccineus bulb, planted it in a pot (so I wouldn’t lose it) and waited to see what would happen – this bulb flowers in late summer (March for me) and has its bloom first. Once the stem has died back, two wide leaves appear.

Also known as blood lily, paintbrush lily or elephant’s ears, the flower is apparently prompted by a spell of summer rain (or watering). The leaves will apparently last through until late spring-early summer. Read more about its cultivation here.

See some great photos of H. coccineus at this website – the author enthuses about the spotted stem almost as much as about the flower!

New Zealanders will be pleased to see that the Cloudy Bay garden, designed by Cornishman Sam Ovens, won a silver gilt award in the show garden category. (For non-Kiwis, Cloudy Bay is a major wine maker in the Marlborough region at the top of the South Island.)

See photographs of all the gold medal gardens (and the Cloudy Bay garden) here.

Chelsea isn’t Chelsea without some argy-bargy and it seems Mr Ovens has objected to a particular element of his neighbouring design. Read all about that here.

The other controversy (so far) has been remarks by Juliet Sergeant, designer of the Modern Slavery garden (gold in the Fresh category), that horticulture tends to be dominated by middle-class white people with double-barrelled names! Ms Sergeant, who was born in Tanzania, is the first black person to design a garden at the 103-year-old Chelsea show. Read more about her comments here.

Overall Chelsea winner Andy Sturgeon may be remembered by Kiwis as heading the 2014 judging team at what turned out to be the final Ellerslie International Flower Show held in Christchurch.

The much-anticipated Chelsea Flower Show is again under way in London, visited by a fine crop of Royals for its first day – Queen Elizabeth and Prince Phillip, the Duke and Duchess of Cambridge, Prince Harry, Princess Anne, the Countess of Wessex, Princesses Beatrice and Eugenie and their father Prince Andrew, Princess Alexandra, Prince and Princess Michael of Kent and the Duchess of Gloucester. Wow!

See some images of the gardens here. Read the Daily Mail’s coverage of the Royals on show here (less about the gardens, more about the people), although it does note that famed English rose breeder David Austin is the same age as the Queen – and also still working!

The striking “red carpet” of hand-knitted poppies began with two Australian women who had a modest plan to crochet 120 poppies as an Anzac Day tribute to their fathers – as you’ll see here, it grew a bit and ended up inspiring 50,000 people around the world to contribute!

The Chelsea Plant of the Year is Clematis chiisanensis Amber. See photos of it and the runners-up here.

The gold medal gardens are announced tonight (NZ time) – I keep seeing tree ferns in the background of pictures of the Queen posing by her floral silhouette. Wine-maker Cloudy Bay has again sponsored a garden – see photos here – but haven’t used native plants.

The Daily Telegraph roundup is an eclectic mix of people, plants and information. Well worth a scroll through. Did you know that the oldest plant thought to be on show at Chelsea is a 117-year-old Cymbidium Lowinanium orchid?

And, finally, The Guardian offers up interviews with the people who make Chelsea tick.

Bay of Plenty Garden & Art Festival director John Beech was guest speaker at the Tauranga Orchid Society meeting last night and had some news and updates about this long-running biennial event.

After reviewing ticket information from 2014 – which revealed that 85% were one and two-day garden passes – the decision was made to change the festival from Monday-Sunday to Thursday-Sunday. (Previously, the various festival areas opened one by one from Monday to Thursday, with all gardens open Friday to Sunday.)

This year the festival takes place from November 17-20 and has 60 private gardens from Katikati to Te Puke, as well as 46 artists exhibiting. John noted that the garden trails are made up of genuinely private gardens with some “places of interest” also listed and this category will include public gardens such as Te Puna Quarry Park.

The Lakes subdivision will again play host to a festival hub and feature one of the largest marquees in New Zealand as a display area. The Expo will include concept gardens, a sculpture walk, speaker series, displays, stands by local garden-related societies (such as the Orchid Society), music and a café.

John has contacted a number of specialist garden groups in the area about having a free stand with a gazebo provided as an opportunity to encourage interest, educate, potentially gather new members, and sell plants – two have responded!

John went to the inaugural Brisbane International Garden Show last year and said the display stands by horticultural groups had worked well and it was something he wants to do here.

I hear so many garden groups complaining about declining membership and/or ageing membership that it beggars belief they wouldn’t jump at this opportunity to put their ‘brand’ in front of an interested public, potentially fund raise and sign up new members. The Tauranga Orchid Society is fortunate to have some new, young and enthusiastic members – and we did that by putting on our three-day annual show with a beautiful display of plants and making sure we have friendly meeters and greeters who have membership information to hand.

The BOP Garden & Art Festival programme will be launched on August 5.

A nifty trick I saw in Japan last year was the training of chrysanthemums. Chrysanthemums, or kiku, are the national flower of Japan and the symbol of the Imperial family.

In the delightful mountain town of Takayama there was an exhibition of chrysanthemum bonsai at Jinya, the old local government office and living quarters, now a fascinating museum. But the largest of the ‘trees’ was an illusion, albeit a clever one. 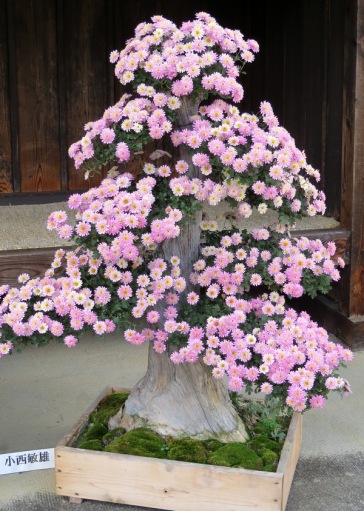 From the front, ladies and gentleman, a chrysanthemum tree. Photo: Sandra Simpson 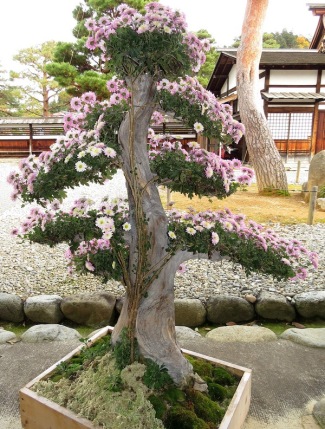 While the back reveals how the trick is performed. Photo: Sandra Simpson 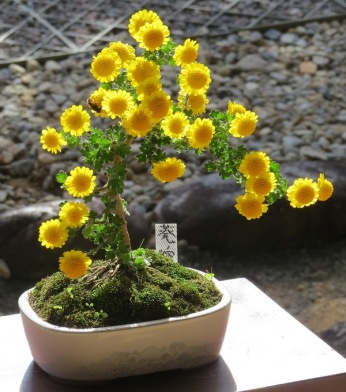 A chrysanthemum trained as a bonsai. Photo: Sandra Simpson

Longwood Gardens in Pennsylvania in the US has been staging a chrysanthemum festival since 1924 and 70 years later set out to achieve a ‘thousand bloom’ (ozukuri) chrysanthemum using Japanese techniques – finally cracking it in 2011! See the story and photos here or watch a 2009 video about the technique (3:30). 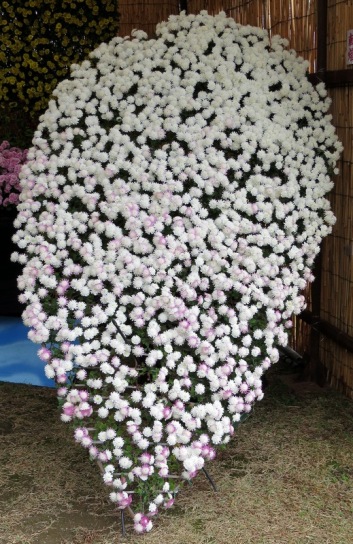 A single plant trained into a ‘cascade’ (kengai) shape on display at Izumo Grand Shrine, about an hour from Matsue. Photo: Sandra Simpson

Wandering along the lakefront in Wanaka and had my eye caught by some large, spreading kowhai trees – nothing like the poor, stunted specimens that serve as street trees in my neighbourhood. These were trees with grunt and clearly of some age. 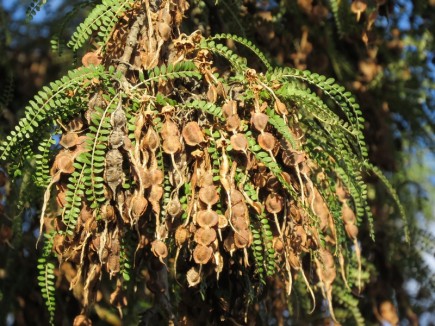 The ground beneath them was peppered with small golden seeds as the wind tossed the branches around. Kowhai  are part of the Sophora family – the Maori name means ‘yellow’ and is pronounced something like ko-fie. Unfortunately, evolution has seen fit to give the tree a seed with a particularly tough outer shell. The tree man I chatted to in Wanaka reckoned seeds that fell in the lake did okay as stones and sand abraded the tough outer shell so water could get in. 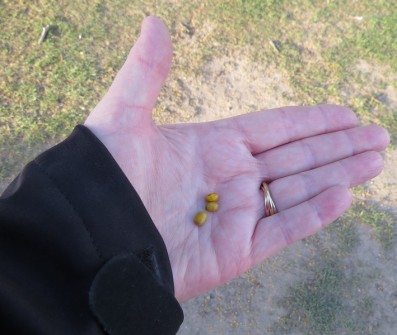 To help start your own seeds try this advice from DOC.

Here in the Western Bay of Plenty we don’t have any naturally occurring kowhai thanks to the volcanic ash and pumice that covered the area 27,000 years ago after the Taupo eruption.

In a 2009 interview Robert McGowan (Pa Ropata), a rongoa Maori medicine expert, said: “Anything with a wind-blown seed or a seed that will be dropped by birds comes back very quickly into a devastated landscape, but the seeds of a kowhai are generally carried back into a landscape by a flood and that will only happen after the rivers start to rebuild the landscape.

“Kowhai seeds can remain dormant for 100 years and need something to wake them up. The pod is very hard and needs to be cracked to get at the seed.” 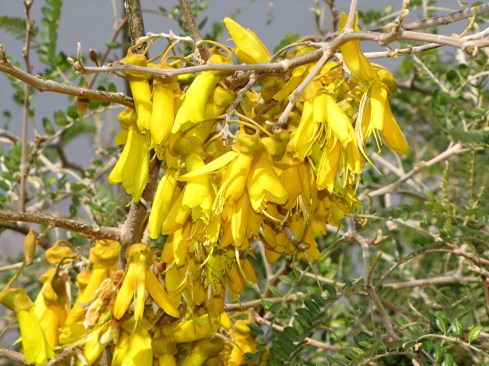 Southland’s Denis Hughes is trying to collect all the various types of kowhai. Read more here. His Blue Mountain Nurseries catalogue is here.