It was almost 60 years ago that Betty Enticott saw her first African violet, commenting to her husband that she rather liked the neat-looking compact plant. Now, Betty has one of the largest collections of African violets in New Zealand.

Back in 1959 Betty was newly married and living at Massey, near Auckland. Her husband, Brian, listened to her praise of the plant and she duly received one as a Christmas gift. “From then on I was interested and picked up leaves from other people, putting them in water until they rooted – I ended up with about 30 plants. Then I got a book about them and started to work out the light they needed and a potting mix – I used garden soil mixed with coarse sand.”

Once a week she put them on her concrete deck and fed them. “In Massey at the time we were surrounded by farms so I’d pick up cow manure from paddocks and put it in a bucket of water to break down. I’d use a dilution of that to feed the plants then spray them with fresh water.”

When the couple set off for England Betty’s treasured African violets were moved to her mother’s home in Tauranga but unfortunately, none survived the change of conditions.

A year later, back in New Zealand with an adopted child and a baby, Brian and Betty settled in Mt Maunganui, later adding two more children to their family. “When I had the time I started again – and this time learned much more.”

She recalls reading articles in some of the American Sunset Books series and joined, as a correspondent member, an African violet club in Hamilton. She also got to know the late George Laurenson who had a large greenhouse of African violets at his Cambridge home. “I visited George often to buy plants and he would give me notes on their care.”

When the Hamilton club folded, Betty and George joined the Wanganui African Violet and Gesneriad Club, with Betty occasionally penning articles for the newsletter. At the time, there was also a club in Auckland but that later went into recess. The Wanganui club was the country’s only African violet club left when it closed about 3 years ago.

“It’s the same old story,” Betty says. “Members were ageing, numbers were dwindling and the young ones weren’t coming on.” 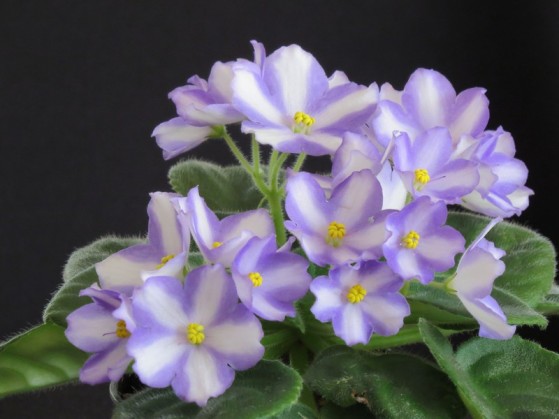 She has been a long-time member of the African Violet Society of America, particularly enjoying its magazine which includes information on other members of the Gesneriad family. “I found out I had four or five plants that belonged to the same family although they were plants I’d bought just because I liked them.”

One plant you won’t see in Betty’s home or garden is a cyclamen, a potential carrier of spider mites which also enjoy infesting African violets. Thrips can be another pest but Betty now uses a potting mix which contains neem oil and thinks it is helping.

With the sudden death of African violet hybridiser Daphne Snell of Pukekohe on Christmas Day 2016 and the dispersal of her collection, Betty believes she now has one of the largest collections in the country – about 250 plants comprising 150-plus named varieties. 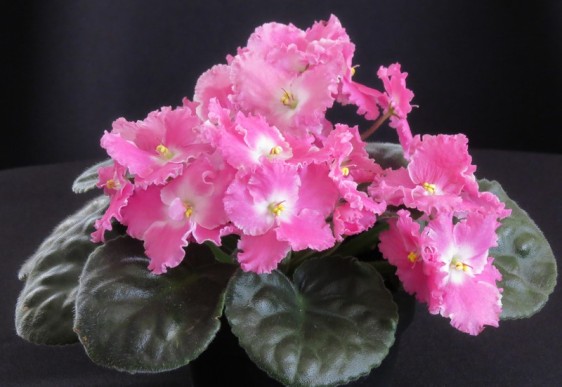 One of Daphne’s plants – Kiwi Dazzler – has been especially popular in Japan and, Betty says, is “one of the best”.

When she and Brian built a home at Mount Maunganui 53 years ago, they included a conservatory for Betty’s African violets featuring fluorescent lights (to encourage flowering) and fans for good air movement (plus she also took over part of the laundry for her miniature plants and ‘plant hospital’). When they moved to Papamoa in 1999 the violets went into a new conservatory, ‘leaked’ into the laundry – and expanded again!

Betty thinks she may have the only plant of Tineke in New Zealand. She is trying to grow some more on to share it round. Photo: Sandra Simpson

“African violets like the conditions you and I like,” she says. “Probably the biggest mistake is to overwater them – they have to have air round their roots but if you overwater them they can’t get that air and develop root rot. If you put plants in a pot that’s too big you increase the risk of overwatering as the roots are surrounded by much more wet potting mix.”

The holy grail for hybridisers is a yellow flower. Some small amounts of yellow have been introduced into white flowers over the past few years, but it has proved difficult to obtain clear, solid yellows.

“Once we get a solid yellow, we’ll get all sorts of other colours too,” Betty says, smiling at the thought of orange and apricot African violets.

African violets, or Saintpaulia, belong to the Gesneriad family, which also includes Gloxinia, Streptocarpus and Achemines.

The botanical name honours the first European to successfully collect seed – Baron Walter von Saint Paul-Illaire, district commissioner of Tanga province (now in Tanzania). In 1892 he sent seed to his father in Germany. The next year the world’s first commercially produced plants were offered in Germany.

Saintpaulias are native to Tanzania and southeast Kenya and can be found growing on shaded cliffs and mountainsides, on moist rocks along rivers and on the shaded forest floor. Altitudes range from 100m to 2,000m. Species plants have tiny flowers in mainly blue, white and pale violet.

German company Optimara is the world’s largest grower of the plants – recently it has developed many new varieties which can be found in New Zealand’s garden centres, hardware stores, etc.

Plants can live for up to 40 years.

To keep African violets happy, mimic how they grow in nature – use shallow pots with a free-draining mix so air can get round the roots (add pumice, perlite and/or vermiculite to ordinary potting mix).

Keep moist, but not soggy, and feed regularly with weak fertiliser.

They enjoy good ventilation, as in the wild, but need to be sheltered. They will not thrive in stuffy, hot closed-up homes.

This article was first published in NZ Gardener and appears here with permission.

Although Hobbiton is only a 40-minute drive from Tauranga, for some reason I’ve put off going. However, seeing the lovely Best in Show garden at last year’s inaugural NZ Flower and Garden Show was the push I needed and we got online and booked a tour, navigating ourselves to the Shire’s Rest in the countryside near Matamata (but you can also pick up tours from Matamata, Rotorua and Hamilton).

A fleet of mini-buses rolls around between Shire’s Rest and Hobbiton all day – our guide told us there are 75 to 100 tours a day in summer – but the system has been well planned and we didn’t feel like the site was overly crowded or that we were being rushed through.

The Lord of the Rings director Peter Jackson first saw the 120-acre drystock farm from the air in 1988 while scouting potential locations. He was looking for, we were told, a pond with a big tree beside it in rolling countryside. Next thing, he was knocking on the farmhouse door – another source told me he was sent packing because a rugby final was on the telly!

Sir Peter persisted and a deal was struck with the Alexander family, but The Shire seen in LOTR was made to be dismantled, which duly happened at the end of filming, although 17 facades remained and guided tours began in 2002 …. but then Sir Peter decided to make some more movies.

Bagend, the home of Bilbo Baggins – and the only Hobbit hole with any depth to it so it could be filmed from the inside showing the front door. Photo: Sandra Simpson

For the Hobbit trilogy The Shire was made from permanent materials and an agreement hammered out to leave the 12-acre set intact when filming finished in 2009. Now, one Alexander brother runs the farm and one brother runs Hobbiton (in which Sir Peter is a 50 percent partner).

All the animals used in The Shire were brought on to set, including the sheep – the farm runs Romneys (and is the biggest sheep farm in Waikato) but Sir Peter wanted black-faced sheep. 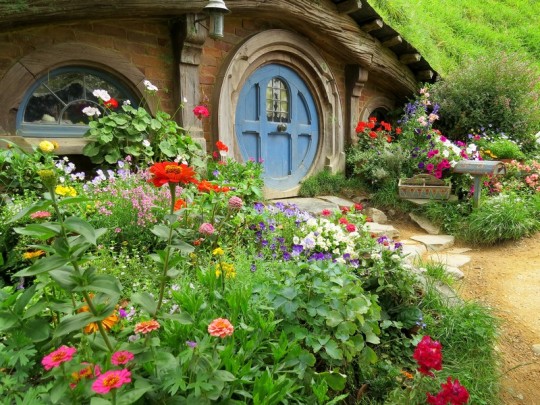 Visitors can view 44 Hobbit holes, all but Bagend a facade only, but what facades! Pretty gardens, smoke curling from some chimneys, beehives, a large, central vege garden and orchard area, and the enormous fake tree that sits above Bagend (the home of Bilbo Baggins). This tree, which looks marvellously real, has a steel frame covered in expanding foam and silicone and 200,000 individual fake leaves (made in Taiwan) handwired on over 6 months. 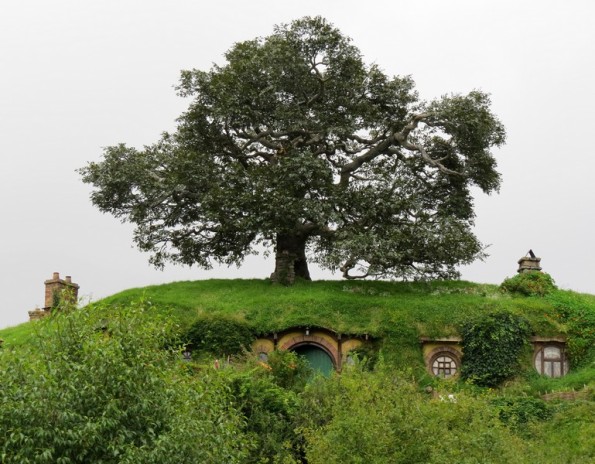 Some Hobbit holes are oversize to make the Hobbits look small (no one over 5’3″ was cast) and some are small to make Gandalf look big! The same logic was applied to plum trees used in a scene – dwarf apple trees were planted, the fruit picked off and plums wired on. All for 3 seconds on screen, our guide said.

The walking tour finishes at the Green Dragon Inn where groups are served beer or gingerbeer in pottery mugs, all great fun. 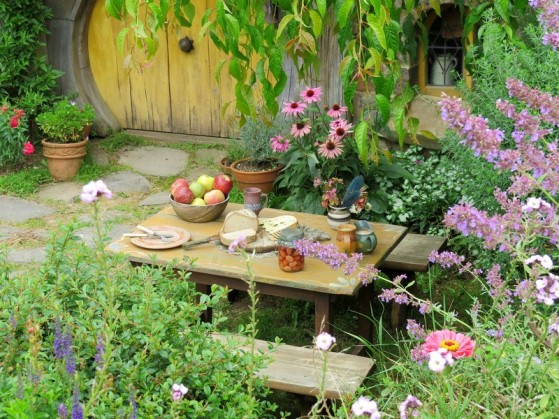 Hobbiton successfully makes it look as though the inhabitants will be back at any moment. Photo: Sandra Simpson

The site gardens are immaculately kept thanks to the efforts of 5 full-time gardeners and 5 part-time – and the attention to detail includes hosing even the grassy/weedy areas to keep the site lush and green during the summer (surrounding farm pastures were drying off to brown).