People who show flowers are always battling the climate – this year camellia growers have been up against an exceptionally mild start to winter.

But Margaret and Leo Mangos wouldn’t consider giving up showing their blooms. After all, this is the couple who loaded three chilly-bins of their best flowers into the car to take them to a national show in Dunedin … and were “heartbroken” when they found they had only six blooms worth showing.

“We’d packed them as well as we could but I think the vibration of the road was just too much for them,” Leo said.

These days the couple use orchid tubes and Dacron to pack their show blooms in boxes and Margaret is on the lookout for a suitable freezer pad to lay in the bottom.

Their dedication to raising gorgeous flowers in their Brookfield garden paid off in 2000 when their semi-double Raspberry Glow bloom won the champion of champions at the national show.

Margaret joined the Western Bay of Plenty Camellia Society 31 years ago, not long after the couple moved to Omokoroa from the South Island. They moved into town 20 years ago – naming the property Ne Plus Ultra after the street Neplusultra in Leo’s home town of Cromwell.

“At one point the council down there tried to change the name, saying no one could spell it and no one knew what it meant, but it was a part of the town’s history and I’m pleased to say they kept it. ‘Beyond here nothing’ is the Latin translation – little did they know there was gold out there.”

Here, he’s happy to use the French translation which means “nothing better”.

A few years ago Leo counted 312 camellia plants in the garden and reckons that, despite subtractions, the total has since gone up. “You’ve got to weigh up your priorities,” he says about adding more plants. “Camellias or the bowling green?”

For Margaret, who is a national camellia judge, it’s simple, although a brush with death in 2001 after a “medical misadventure” means she can no longer bend to dig or weed so is experimenting with camellias in pots and is enjoying expanding her collection of bromeliads.

But her first love will always be camellias. Despite having been released from hospital just three months before, Margaret wasn’t going to miss the national show in August 2001, and Leo included a wheelchair among the packing for the trip to Hamilton.

“I know people complain about the mess that camellias make when the flowers fall on a lawn,” Leo said, “but for me the beauty is just as much about as what’s on the ground as what’s on the tree.

“I love coming out and seeing them lying on the ground all round the tree, it’s magic.” 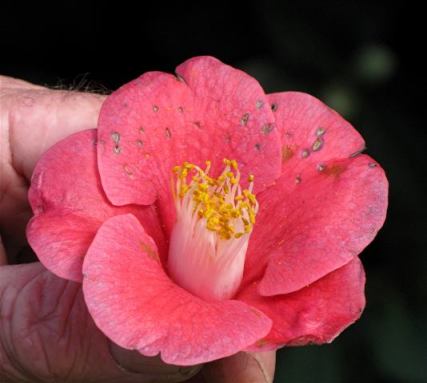 And if your blooms have been pocked by waxeyes after nectar well, Leo says, it’s like a beautiful girl with acne. The beauty’s still there, you just have to see past the spots.

This article was originally published in the Bay of Plenty Times and appears here with permission.

On a recent visit to the Auckland Regional Botanic Gardens for the first time I stumbled upon the Potter Children’s Garden.

The garden, which was made possible by funding from the Frederick Potter Masonic Trust, was officially opened by HRH Prince Charles, the Prince of Wales in March 2005 – and, despite the similarity of names, is nothing to do with the Ian Potter Foundation Children’s Garden at the Royal Botanic Garden Melbourne. Read more about Sir Ian Potter.

New Zealander Frederick Potter (1857-1941) was a Freemason who dedicated his life to helping young people, despite having no children of his own. He was born in London and came to New Zealand as an infant with his parents and elder brother William aboard the steamship Lord Ashley.

A successful businessman he made land donations to various organisations in several parts of Auckland, including an acre in 1929 to the Takapuna Borough Council for what became Potter’s Park.

In 1930 the Potter properties and endowments were entrusted to the Grand Lodge of New Zealand which created the Potter Masonic Trust. Mr Potter died at Auckland Hospital on March 29, 1941.

The Potter Masonic Trust has also given money to children’s parks in Hamilton.

The Potter Children’s Garden in Auckland was extended in 2010 and also won an award that year – and encourages self-discovery from its visitors. As well as native plants, there is a desert area (don’t you love the skull!) and a rainforest area, complete with “steaming rain”.

The garden also aims to introduce children to the wonders of New Zealand plants and animals and the relationships these have, for example the puriri tree, kereru (native wood pigeon) and mokoroa (puriri moth).

Bromeliads attached to what might be old bridge pilings. Photo: Sandra Simpson

In other news from the garden, you may have seen that a 90kg bronze sculpture of an eel was stolen at the weekend – the NZ Herald reported this morning that it has been recovered intact and will be given to the sculptor, Bing Dawe, for repairs. The artwork is worth $30,000 and was recovered from a scrap metal yard after thieves tried to sell it for $300!

Well it was only to myself. No more plants, I said, I’m only going to the auction to make up the numbers … famous last words. Mind you, not all of the $80 spent was on orchids, some of it went on jam, lemons, books and bromeliads.

The one orchid I really had my eye on went to another bidder – twice! Never mind, there’s always the Tauranga show in September.

Really, nice plants (many with flower spikes on) for $2, $3, $5 … who could resist? The old milk-bottle crate that came with four Dendrobium orchids tucked in it was a charming bonus and brought back memories of lugging the milk in from the gate in such a crate on cold and frosty mornings.

Thanks to the BOP Orchid Society for a great afternoon out.

The New Zealand Rose Review, put out by the NZ Rose Society, has this year collected information from 53 contributors about their favourite roses. Useful information to have at hand when you’re in a garden centre – and now is the best time to buy and plant a rose so that it’s well rooted in by the time spring arrives.

The  “Review of Newer Roses” section includes comments from growers in various parts of the country about particular positives and negatives they’ve noticed.

I won’t reproduce the full lists of favourites here, that’s hardly fair on the Rose Society which wants to sell copies of the Review, but will mention the top-ranked rose in each category.

Fun, educational, even pretty. Are we talking about flesh-eating plants? Tauranga enthusiast Elizabeth Bailey reckons that once you’ve grown one carnivorous plant successfully you’ll be hooked – if not consumed – by this group of specialised plants.

“People buy a Venus flytrap for a child and because the plants are inside at garden centres they keep them inside but the plants die and they never bother with a carnivorous plant again. It’s such a shame.”

Elizabeth started growing carnivorous plants about 10 years ago when she was working in a garden centre and saw one in a bargain bin.

“I took it home and got it going again. Cor Schipper in Rotorua grows his own, including some of his own hybrids and I used to swap some of my orchids for his plants.”

The only requirements most have are full sun and standing in water, preferably rainwater – they don’t need to be fed as they catch their own nourishment. Most also don’t mind the cold, although Nepenthes which come from the tropics, prefer winter cover.

Sarracenias are attractive tube-like plants native to the swamps of the eastern United States and these form the bulk of Elizabeth’s collection.

“Sarracenias will die back in winter so cut them back hard. Some will put up winter growth, which is like a strappy leaf and not carnivorous. These strappy leaves die back at the end of winter and as the new pitchers appear the plants come into flower. And the flowers are really lovely.”

The flower of a Pinguicula. Photo: Sandra Simpson

New Zealand has native carnivorous plants (move the slider to the right to see the link) – seven sundews (about half of the family are native to Australia) and two Utricularia (bladderworts), which suck in insects that touch trigger hairs on the “bladders”.

This article was first published in the Bay of Plenty Times and appears here with permission.

At Te Puna Quarry Park this morning when “butterfly lady” Mary Parkinson pulled a piece of yacon out of the boot of her car and asked if I wanted a bulb or two. The Vege Grower was adamant that he didn’t – but I wonder if he would have been more interested if Mary had referred to it as an “underground pear”?

Smallanthus sonchifolius (yacon) is a tuber vegetable native to South America – and are related to both sunflowers (yacon flowers are like small sunflowers) and Jerusalem artichokes (see the photo of the crowns and tubers below).

A young yacon plant – they can grow to 2m. Photo: Sandra Simpson

Yacon is a perennial with tubers that look a bit like smooth kumara (sweet potato). Mary says they can be eaten raw or roasted. This article from the Guardian tells you more about growing them and includes a couple of recipes – the comment that they are an acceptable form of dietary sweetness for diabetics is interesting. 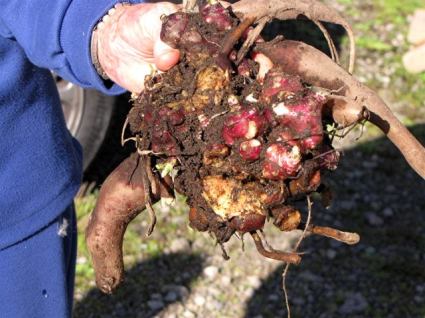 Mary’s root clearly shows the small bulbs that grow the leaves, and the tubers that form from a shooting bulb. Photo: Sandra Simpson

The Yacon NZ website includes growing information and recipes. The website owners grow their crop just outside Hamilton and sell yacon crowns on TradeMe. Country Trading also has yacon crowns for sale, the white variety, as does the Koanga Institute.

This article from the Southland Times gives a bit more information about the nutritional value of yacon and says the plants have only been grown in New Zealand since 1982.