Lorraine Cox gave me a call last week to let me know she had some interesting plants in flower and would I like to come and take some photos? Lorraine keeps a beautiful garden in central Tauranga and knows her plants so, needless to say, I accepted her kind offer. 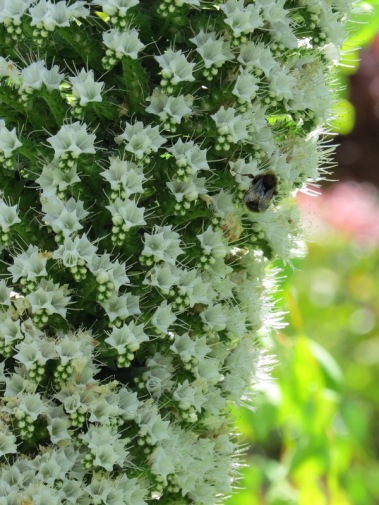 She has had her plants for 4 years and despite being told they would flower after 2 years, it has taken them this long to come into bloom. These echiums have one towering flower spike per plant.

Described as ‘rare’, this echium is native to the island of Guernsey in the English Channel and prefers a cooler, moist position which, Lorraine believes, may explain why she’s had to wait so long for flowers as most of her plants are in full sun. The plant that has done the best this year (pictured above) is in semi-shade.

She found her bundle of plants at Bunnings (coming from Hamlin Nurseries in Papakura), proving it’s always worth keeping your eyes open.

Update, January 9, 2016: After some research, Lorraine now believes her white echium to be Echium simplex (White Tower of Jewels) from the mountains of Tenerife in the Canary Islands and described as being drought tolerant. Read more here.

Although her next treasure flowers only every 7 years it was to be found in a pot well away from the house – and for a very good reason. Her Amorphophallus konjac bulb, a gift from her son, emits the scent of rotting meat (to attract pollinators) as the flower unfurls. I couldn’t detect any scent the morning I took these photos, but by early afternoon Lorraine had emailed to say ‘Stinky’ was doing its thing. 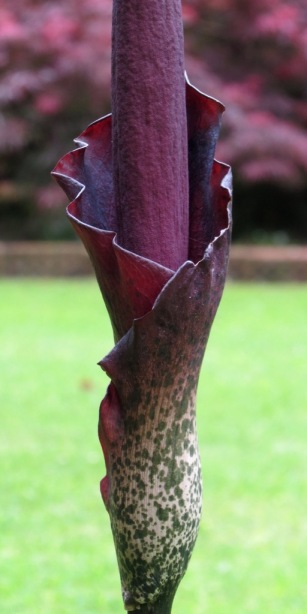 Amorphophallus konjac in flower – there is no foliage at this stage, that comes later. Photo: Sandra Simpson

Read more about this interesting plant here. Among its common names are voodoo lily,  corpse flower and devil’s tongue arum. Read a Sandra’s Garden post on the 2013 flowering in Auckland of this plant’s larger cousin Amorphophallus titanium.

Petrea volubilis isn’t particularly rare or unusual but what you may not know about this vine is that its true flowers are the tiny ones with a splash of white at the centre – the rest of the purple ‘stars’ are calices (I didn’t either until Lorraine told me). 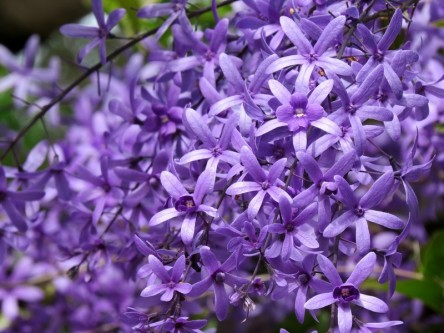 The true flowers are the ‘doubles’ with a white centre. Photo: Sandra Simpson

It gets its common name, sandpaper vine, from the harsh surface of its leaves, which are in such contrast to the soft racemes of flowers.