David Brown of Versatile Vireyas near Tauranga has some top tips for success with these tropical-look plants (in no particular order):

When planting, don’t rip the root ball apart. Vireya rhododendrons have fine, hairy roots and they need them all! “A healthy root system is too valuable to pull apart,” David says. “It’s best to leave well alone.”

Fertilise them well as they grow year-round and flower year-round (being from the equator they don’t have seasonal growth triggered by longer days). Sheep pellets are okay, but for vireyas a slow-release is probably better, apply every 6 months.

“Why rake up autumn leaves from your garden and dispose of them and then put fertiliser on the garden?,” David asks. “Let the leaves stay and the vireya roots will come up to where they should be – in the top 2 inches of the soil.”

You may be told at a garden centre that vireyas need only morning light or half a day of shade. Nonsense, says David. He saw them growing in tree tops in Indonesia and had a moment of clarity – vireyas happily grow in full sun and should be grown in full sun. However, he warns they won’t look as tropical as the soft leaves will harden to cope with the extra light. The plants will flower more often, but the flowers won’t last as long.

There is no need to prune, so don’t. The plants will be stronger and happier if left alone. Once a vireya has reached the optimal height to produce lots of flowers it won’t get any taller, only wider. The height varies from plant to plant.

However, if a gardener feels there is a real need to prune, feed the plant well for 3 months beforehand so it’s in full health. Prune only when the plant is in active growth (not flower growth). “I believe that when the sap is pushing through it will also move the buds along.”

David’s preference is to prune to a leaf cluster, rather than to a bud on the stem, as each leaf cluster contains a number of buds and offers more chance of new growth.

After flowering do dead-head the bush – this doesn’t mean removing the leaf cluster (there are new buds there) that the flowers have nestled in, but pulling out or clipping the spent flower heads and stalks from within the cluster (ie, leave the cluster on the branch). If you don’t dead-head the plant puts all its energy into developing seed capsules and this will set back the next flowering by 3 to 6 months.

Young plants can be tipped (pinch out the growing tip) to produce a bushier vireya. 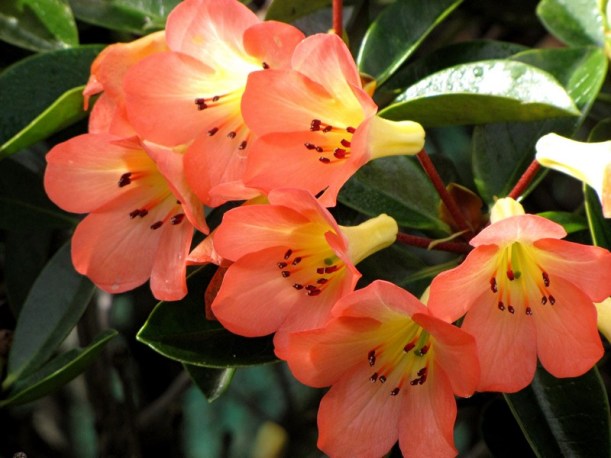 Vireyas dislike lime which locks up an essential nutrient in the soil, David thought iron. Calcium is important to create strong plants and he recommended gypsum as something that doesn’t alter the soil’s pH. Sold as ClayBreaker at garden centres.

If growing vireyas in a pot, be sure to use exactly the same potting mix as in the old pot in the new container and don’t move into a much larger pot. Try not to disturb the roots.

As we’re in winter and experiencing some hard frosts, David noted that vireyas are frost tender. If covering, it’s best to have the cloth above the plant (ie, not touching the leaves) to ensure there’s no damage. “I’ve seen plants with three layers of frost cloth laid on them get burned. I prefer to use weedmat and always keep it above the plants.” For his commercial operation he has also used irrigation as a protection against frost.

Read more about vireya rhododendrons at this specialist website.