I picked up a copy of The Oxford Book of English Detective Stories (1992) for $1 at a recent book sale and have been steadily working my way through the short stories, arranged in chronological order. When I got to Thornapple by Ruth Rendell, which was towards the back of the book, I had the odd experience of immediately recognising the plant being described, even though I previously hadn’t known its name.

“The plant, which was growing up against the wall between the gooseberry bushes, stood about two feet high and had pointed, jaggedly toothed, oval leaves of a rich, dark green. It bore, at the same time, a flower and a fruit. The trumpet-shaped flower had a fine, delicate texture and was of the purest white, while the green fruit, which rather resembled a chestnut though it was of a darker colour, had spines growing all over it that had rather a threatening or warning look.” 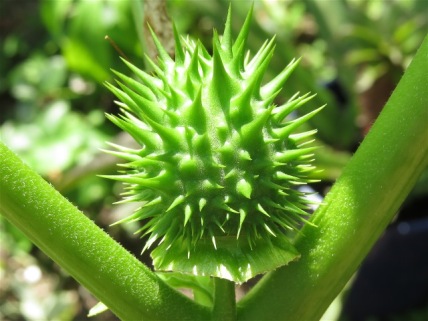 The fruit of the thornapple. Photo: Sandra Simpson

Rendell goes on to name the plant as Datura stramonium or thornapple or Jimson’s weed, native to Asia, and highly poisonous (and goes on to make this toxic trait a key plot point).

Why did I recognise it? Because one popped up in my garden not so long ago and I let it grow to flowering size to see what it was. Goodness knows where the seed came from, perhaps deposited by a bird, although the TERRAIN website suggests seeds may be carried in the hair of animals. It is also poisonous to livestock.

Once the spiky fruit arrived it clearly wasn’t a plant I wanted to let seed, so after a few pictures, out it came (while wearing gloves, it had alarmed me that much, some sort of primitive response). The flowers seemed to last for about 24 hours, but there were plenty of them – which is why weeds are weeds, I suppose. They’re good at reproduction and not minding where they grow.

Unfortunately, the flowers were closed when I took this (and then I pulled it out) but were white and trumpet-shaped. Photo: Sandra Simpson

Thornapple is, according to Te Ara Encyclopaedia of New Zealand, the second most likely plant to cause severe poisoning in this country (behind the castor oil plant or Ricinus communis).