Despite a cold snap arriving today, we’ve had a very mild winter and Nature is beginning to throw off her blankets of hibernation. Here are some photos that I hope will get your sap rising and excited about the garden again.

A tui gets serious about feeding in a Prunus campanulata. Photo: Sandra Simpson

They may be weedy in our warm climate, but the early flowering Prunus campanulata make spirits soar with their bright colour and branches full of nectar-feeding birds. One of the main roads in Tauranga has a stretch of P. campanulata as street trees but with their habit of spreading through the landscape, as they come to the end of their lives, they are being replaced with other types of tree.

Speaking of Felix Jury and red flowers, here’s a picture of his hybrid Magnolia Vulcan, a real stunner if you have room for it.

Magnolia doltsopa, also known as Michelia doltsopa or sweet michelia, has its leaves on when it flowers but you’d hardly know, so covered in sweet-scented white flowers is it. We have a large tree on a verge near our home and I always wonder how safe the traffic is as it’s so eye-catching.

Perhaps in homage, the council is planting a nearby street with M doltsopa.

M. doltsopa Silver Cloud came out of Duncan and Davies in the 1950s or 60s. The Magnolia Grove website has information about New Zealand-made magnolia hybrids. Magnolia Grove has released the Genie (2011) and Cameo (2013) hybrids, with Genie surviving -24C in Hungary!

There’s nothing quite like a leafless branch covered in magnolia blooms to stop passers-by in their tracks. And, despite most of her trees having grown way past the height stated on the tags, Lorraine Cox wouldn’t be without her magnolias.

“We’ve been 35 years in our home and I don’t know how many times we’ve changed the garden round, but you can do that in Tauranga,” Lorraine says. “I guess the garden should be planned, but I see things I want and have got to have … and then I find a space for them.”

Her passions for the past few years have been maples, for their autumn and spring colour, and deciduous magnolias, even though some of them take several years to flower. She waited five years for her Magnolia campbellii Alba cross to flower, and says that one year she threatened it “with the chop” as a last-resort tactic. It worked, even though the tree usually takes 10 to 12 years to flower. 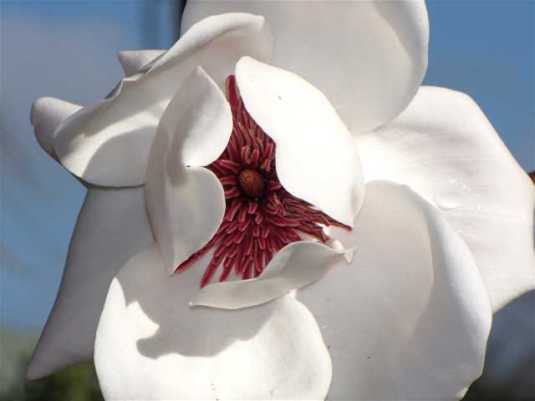 She has chosen trees for a staggered flowering from July through to October, and has a colour range from white to the darkest of the magnolias, among them Magnolia liliflora Nigra, Magnolia Yellow Fever (although Lorraine says it’s more cream than yellow) and Magnolia x brooklynensis Woodsman, a relatively rare tree that has flowers with purple and green petals.

“Magnolias tend to flower profusely every other year, but the exception to that is Vulcan.”

Lorraine bought her Vulcan when the tree was first released about 16 years ago by the Jury family in Taranaki, saying the distinctive red flowers stood out among the more common pinks and whites.

“Quite a few of mine are Jury-bred magnolias,” Lorraine says, “but they don’t have the growth in Taranaki that we have here so you can’t believe what they say on the label. They shoot past that.”

She notes that Vulcan blooms take about four years to come to their true colour and can look “quite insipid” at first. “But every year the colour gets a bit darker and a bit stronger.”

Some of the larger trees have been underplanted with members of the shrubby Magnolia stellata (star magnolia) family, including Magnolia loebneri Leonard Messel, a pink stellata-type flower.

Her first tree was Magnolia soulangeana (tulip magnolia) that Lorraine says is “just the common one that you see everywhere”. Among her collection is Atlas, considered to have the largest flower of any of the deciduous species, and another Jury creation. “It’s magnificent,” Lorraine says of the flower, “about 30cm in diameter and quite perfumed.”

She’s also a fan of the crinkled petals of Felix Jury, another large-flowered tree. Both Star Wars and Black Tulip have repeat flowerings, the latter, Lorraine says, with a large burst of blooms before being “constantly” in flower for a long period.

She recommends Black Tulip, Vulcan and Caerhay’s Belle for small gardens due to their upright and narrow growth habits.

“I saw a tui diving into a magnolia bloom the other morning – he was really pulling at the flower, which wasn’t quite open, to get at the stamens. So we’re not the only ones who think they’re gorgeous.”

Deciduous magnolias are native to Japan and China; evergreen magnolias to the southern United States.

In New Zealand the Jury family of Taranaki is the name most associated with deciduous magnolias, however the late Felix Jury released only eight new trees and his son Mark, despite raising about 1000, has released named only four so far.

It takes up to 20 years from the initial cross to select, trial, evaluate and build up a new variety for release.

In 2003 the International Magnolia Society gave Mark Jury the Todd Gresham Award for his work. 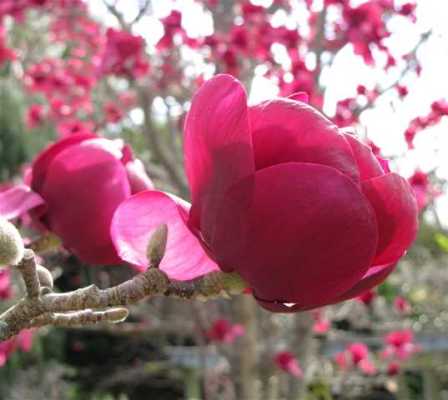 This article was first published in the Bay of Plenty Times and appears here with permission.