Driving to Wanganui on SH3 on Saturday my eye was caught by vivid roadside displays of pink flowers, particularly from Turakina north – then I saw a valley of colour in farmland by the turnoff to Ratana Pa so began to realise the ‘pretty’ show might not be welcome.

I didn’t really have anywhere to stop so don’t have a shot of a wall of flowers on a road cutting, but on Sunday morning when I was out prowling round the riverbank in the mist, found a plant in flower and photographed that. 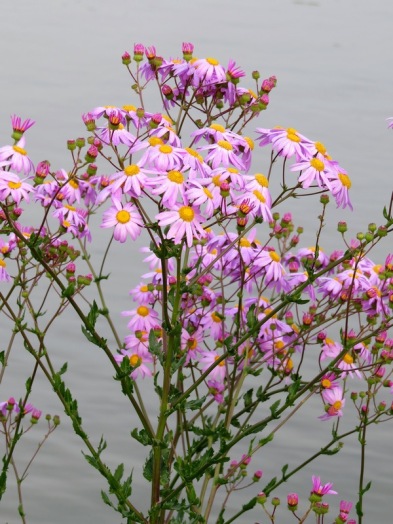 A bit of further inquiry from a knowledgeable plantsperson gained the information that it was a “South African daisy”. Turns out its common name in New Zealand is pink ragwort (Senecio glastifolius) – and it is shaping up to be a massive problem in the Wanganui-Manawatu area.

Horizons (regional council) environmental co-ordinator Craig Davey said in 2014 it was a weed that originated from the garden, first reported in the wild in 1963, and that it had spread too far in the region to consider eradication. Given that a single plant can produce 150,000 seeds I would have thought the council would spray the roadsides while it’s in flower in the interests of being a good neighbour!

Pink ragwort was initially seen only in sandy country but is now happily establishing itself further inland. Once I started looking, I saw some on the site where the Criterion Hotel in Bulls was demolished and in long grass beside SH1 just south of Sanson. Some farmers rate this third on their list of hated weeds, behind gorse and broom.

In 2012 Horizons was asking people to report sightings of it – just 4 years later the plant is highly visible throughout the region.

Hand-pulling (it will grow back from root fragments if mowed) and burning the plant (including flowers to stop any seed from ripening) is one of the only solutions, the other being herbicide application. As with yellow ragwort, the plant is toxic to cattle and horses.

Taranaki is trying to contain the plant south of its regional boundary. Read more here. I could find nothing on the Horizons website about the plant.

New Zealand cattle and dairy farmers have a long history of doing battle with yellow ragwort (Jacobaea vulgaris, formerly Senecio jacobaea) which can take over pasture. Read more here and go here to read about the problem 1930s farmers had with exploding trousers (it’s not a joke) when battling ragwort.

The caterpillar of the cinnabar moth (Tyria jacobaeae) was introduced to New Zealand in 1929 as a biological control for yellow ragwort. Read more here about the moth caterpillars and how they deal with the plant’s high levels of toxicity.