From October 1-14 Yates NZ is giving away free seed packets of butterfly friendly plants to help attract the beautiful insects (and important pollinators) into our gardens. Register for free seeds here.

It’s Saturday morning in the butterfly garden at Te Puna Quarry Park, near Tauranga, and while monarchs flit and flutter 83-year-old Mary Parkinson is clambering up a rock face to plant a prickly euphorbia, while 80-year-old Norm Twigge tames a wayward shrub with loppers.

The pair, who met as trustees of the Monarch Butterfly NZ Trust, have for the past 2 years combined their talents in the garden, one of the many themed areas in the 32ha park, after Norm, a lifelong butterfly enthusiast, moved to Tauranga from Whakatane. 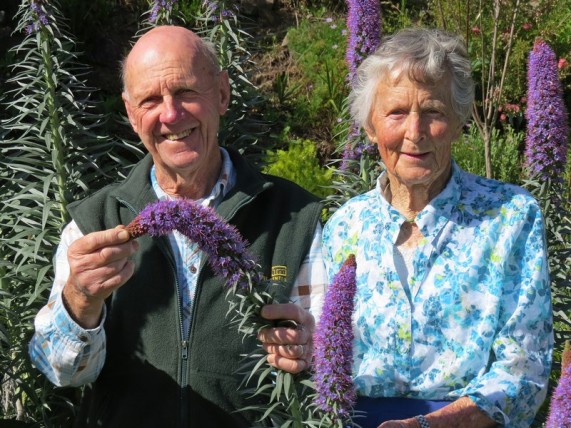 Mary, NZ Gardener’s Bay of Plenty Gardener of the Year in 2010 and long-time Tauranga Orchid Society member, started helping at the former gravel quarry at the behest of her sister and foundation volunteer, Jo Dawkins, after a large donation of Cymbidium orchids arrived.

The butterfly garden, on a terrace in the area planted with orchids, was developed in 2007 after Mary spotted a self-seeded swan plant amid 3m-high gorse. “Actually, the butterflies invited themselves,” she says. “They found the plant and laid their eggs, all I did was try and give them a home.” 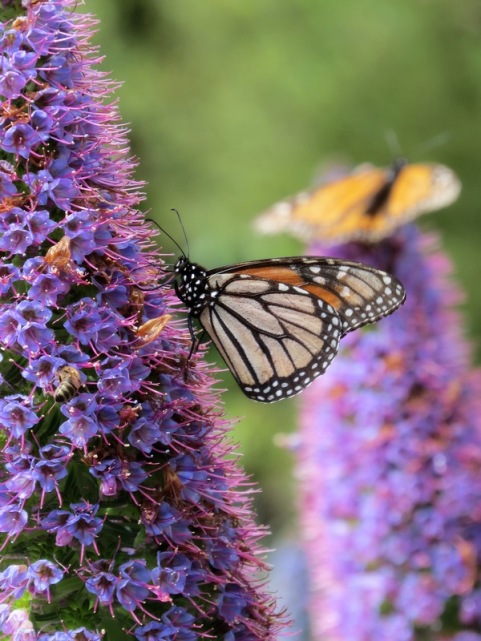 Each year she raises as many monarchs as possible which, at various times, means wasp and preying mantis patrols, as well as hauling buckets of water in summer to keep nectar-rich flowers in peak condition.

“I just keep suggesting things and then have to get stuck in and get the work done,” Mary says, recalling that her offer to stage a Monarch Butterfly NZ Trust conference in Tauranga in 2009 also meant clearing and planting more of the terrace in readiness for a conference visit.

A small hatching house was added when she and fellow volunteer Shona Purves decided to feed caterpillars inside to protect them from wasps. Thanks in part to public response – containers of caterpillars left on site – it was quickly apparent a larger house was needed.

In 2016 Mary and Norm extended the larger, second house in support of a MBNZ Trust project that saw UK conservationist Steve Wheatley and local entomologist Peter Maddison investigate the forest ringlet butterfly, in decline in lowland areas. Norm, who has been recording forest ringlet sightings in the Mt Ruapehu area for 20 years, was also be involved, particularly during the trial breeding phase. 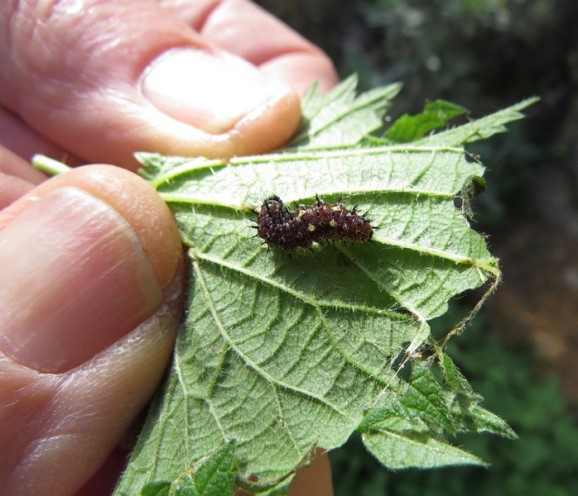 An admiral caterpillar on a nettle leaf. Photo: Sandra Simpson

Norm raises admiral butterflies, both red and yellow, in the quarry garden. Loss of habitat is the major problem facing these butterflies as nettles are essential to their life cycle. “This is a public garden so we can’t grow big areas of nettles,” Norm says. “Someone’s always got to touch – even if there are warning signs – which means the size of our admiral populations will always be limited.”

He’s also keen to see if any “migrants” that blow over from Australia – blue moon, painted lady and the lesser wanderer –  can be encouraged to breed.

“The biggest thing is the lack of somewhere warm for them to overwinter,” he says, adding that while living in Whakatane he tried heating a room overnight to see if he could create the right conditions for some lepidopteran visitors. “The power bill soon made me see sense.” 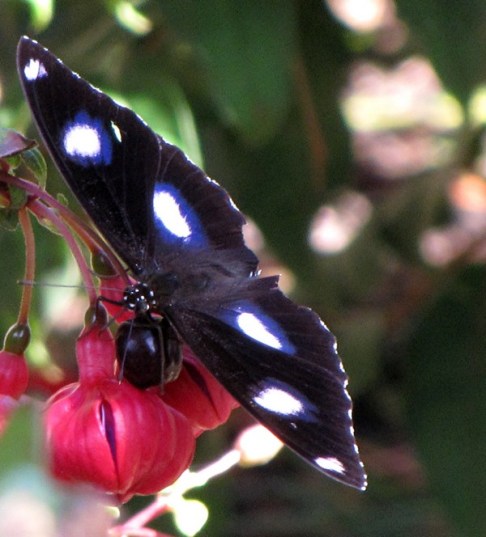 Norm notes many lawn “weeds” are also great butterfly food, including clover and dandelion flowers. “And buddleias are fantastic,” he says. “There are several that don’t seed but sadly they’re all regarded as pest plants. It’s known that butterflies can detect food from 2km away so planting the right things means butterflies in the area will come.”

The white-flowered swan plant and the two brightly coloured Asclepias curassavica (tropical milkweed) provide nectar for monarchs, while the plants themselves play host to monarch eggs, feed the caterpillars and are often home to the resulting chrysalis. Providing enough swan plant for very hungry caterpillars stresses many people, Mary says, and over the years she’s taken in thousands of caterpillars to raise. 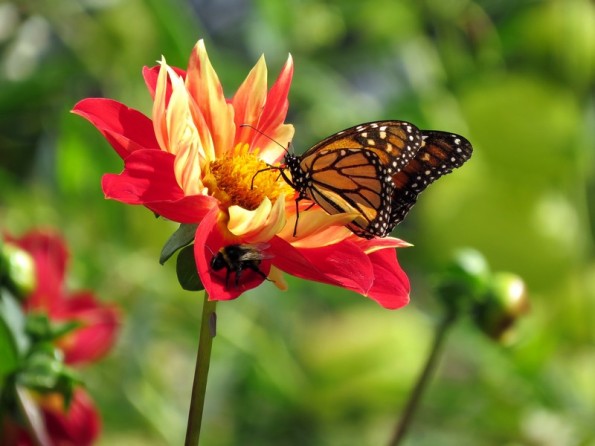 A monarch feeds on Dahlia ‘Pooh’, a favourite plant in the butterfly garden. Photo: Sandra Simpson

In 2016 Mary tagged and released 400 monarchs from March 1 until the end of June “when I ran out of tags”. It’s hoped that anyone who finds or photographs a tagged butterfly will go to the MBNZ Trust website and record the “white dot” number and where the insect was found so giving researchers an idea of how far the insects travel and clues to where they cluster to overwinter.

The park’s lone swan plant of 9 years ago has morphed into many more, both in the butterfly garden and beyond, although Mary accepts they need thinning to stop them spreading too far.

“If you’re worried about swan plants seeding through your garden, snip off the green pods before they burst,” she advises. “Swan plants don’t have a long life, maybe 3 or 4 years, so you want at least one new one coming on each year.”

When buying swan plants from garden centres check they are spray free and keep your garden spray free.

Keep some swan plants under wraps (old net curtains, mosquito nets) so not all have eggs on them and/or are eaten.

Pumpkin can be used as food only at the end stage of a caterpillar’s life (2cm+). Any earlier and the butterfly will emerge deformed.

Wasps, ants, preying mantis and passion-vine hoppers all predate on one stage or another of the butterfly life cycle.

Lend a Hand: Mary and Norm are always looking for helpers. To volunteer simply turn up at Te Puna Quarry Park at 9am on a Tuesday, taking your own smoko.

This article was first published in NZ Gardener and appears here with permission. 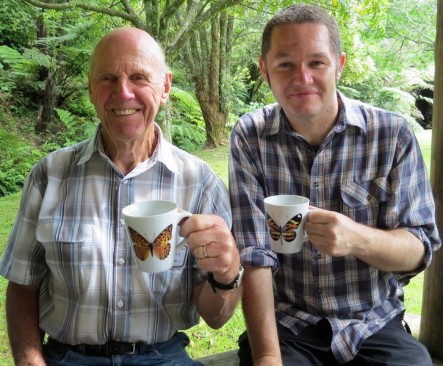 The Monarch Butterfly NZ Trust has brought out Steve, who works for the Butterfly Conservation Trust and is on a 3-month sabbatical, especially for the project. He will be based in the Tauranga area until Christmas, then moves on to Auckland and the South Island.

Norm has been recording forest ringlet sightings in the Mt Ruapehu area for 20 years and says there are six or seven areas nationwide where the butterfly is found but not a lot is known about breeding patterns or why Dodonidia helmsii is declining in numbers in lowland areas, so it’s hoped this project will fill in some of those gaps. According to the Nature Watch website, the butterfly has become “significantly rarer over the last 50 years”.

The park’s butterfly garden features in the December issue of NZ Gardener and includes interviews with the garden’s founder Mary Parkinson and, since he moved to Tauranga from Whakatane a year ago, her right-hand man Norm.

Went and saw Flight of the Butterflies last night – delightful 3D documentary being shown as a fundraiser for the Monarch Butterfly NZ Trust.

This delightful film traces the work of Canadian scientist Fred Urquhart to understand more about the orange butterflies that fascinated him as a child, alternating with a narrative about the monarchs’ grand migration. Until Fred and his army of ‘citizen scientists’ no one knew the flight path, what happened at the other end or even where the other end was!

Beautiful photography that had us all reaching out to cup a butterfly as they flew round our heads (3D glasses on loan at the theatre). The film was introduced by Jacqui Knight, chairwoman of the MBNZ trust, who mentioned the alarming decline of the native forest ringlet butterfly.

Merivale Community Gardens in Tauranga is adding a new plank to its platform – installing vege gardens in backyards with ongoing support to help keep it producing. The first one was installed in March and sponsored by Dr Luke Bradford, a GP. To sponsor a garden or to be considered for one at your place email community gardens co-ordinator Deb McCarthy.