Wandering through the Hamarikyu Garden in Tokyo last year I noticed that many pine trees had straw sleeves tied around the branches. A bit more inquiry turned up the information that they are put on in autumn and used to trap pests (which snuggle into the straw for winter) before being taken off and burned in spring.

Komomaki were developed in Japan during the Edo Period (1603-1867) to combat a pine moth (Dendrolimus spectabilis) known in Japanese as matsugareha. The sleeve provides an overwintering site for the pest, which  does its damage in spring when the caterpillars are hungry for pine needles. The attack continues through to early summer, leaving the tree unable to feed itself and making it vulnerable to parasites. 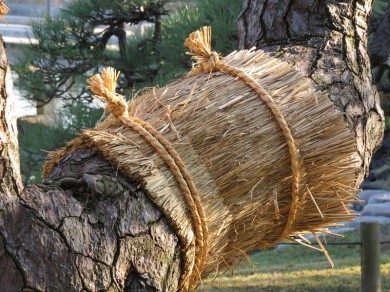 As with everything in Japan, great attention is paid to detail. The komomaki could have been tied on with plastic strips (probably cheaper) but straw ropes look so much better. Photo: Sandra Simpson

This excellent 2012 article from The Japan Times notes that komomaki have been researched and aren’t as effective as once thought – in 5 years of study they trapped more beneficial insects than harmful ones! The sleeves are now most likely used to convey a sense of season, especially in Tokyo where winters aren’t nearly as cold as they once were.