Popped over to the Waikato Orchid Show yesterday which was the main part of the Plant, Garden & Orchid Extravaganza at Hamilton Gardens. The gardens were heaving with people on a beautiful sunny Sunday and a Scarecrow festival to boot – great to see families, often of three generations, enjoying the beautiful surrounds.

Here’s a selection of orchids at the show (I heard from a reliable source that only 1 point separated the Champion and Reserve champion – an amazing couple of plants). 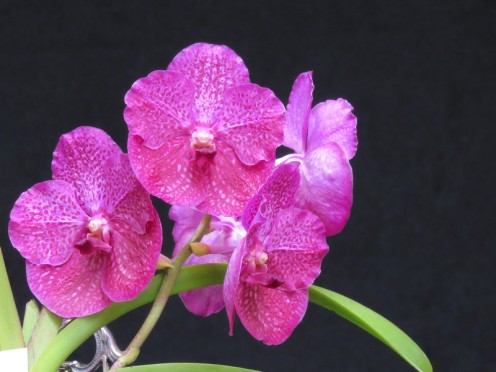 Reserve champion was this eye-popping Lycaste Shugakuin grown by Bill Pepperill, which was a mass of flowers (and this isn’t all of them). Photo: Sandra Simpson

The pretty little Sarchochilus orchids are coming into full bloom right now. This is Karen Ann, grown by M Timm, and First in its class. As well as the sparkling white flowers, it also has red stipples on the flower stems. Photo: Sandra Simpson

Also known as the leopard orchid, Ansellia gigantea is native to tropical and southern Africa. Not many African orchids are seen at shows. The plant, owned by Ron Reeves, was Second in its class. Photo: Sandra Simpson